This music is the fruit of a close collaboration I had with the Corean painter Ouhi Cha, on the interaction between painting and music.

In my work, Ouhi Cha wished to feature four different musical sources :
- Korean traditional music
- Richard Wagner’s Walkyrie and Twilight of the Gods excerpts, as well as Gustave Mahler’s the Song of the Earth excerpts
- my own music
- and sounds of nature.
Amongst these four different sources, I chosed some excerpts that I felt were the most appropriate to be integrated in the composition of a new general and consistent structure.

So this work, with a duration of 59 minutes, is constituted of a succession of 11 musical sections. Some of them have been completely composed, some others totally recomposed, others superimposed to musical fragments by very slow fade in – fade out, and others used without any modification.

While I composed this big musical fresco, I was continuously thinking of two ideas that would give another dimension at the connections « painting-music ».

The first one tries to respect the inner rhythm or the pace of the visitor in his movings (slowed down, fast or stopped walk), that introduces as an immediate consequence the concept of succession of tension, relaxation and even lull. So one can catch sight of a musical function inherent in this exhibition which would be to lead the visitor (pace) by the ear. We can see that music is never considered as a background music.

The other idea is about the fusion of the two arts. Here, music acts as a filter to awake the silence of the eye, in its unutterable progress.

The magnetic tape was made thanks to Thomas Seeling’s assistance, in the electroacoustic music studio of the Technical University in Berlin.

Listen to an extract
Electronic sounds mixed with last part of the Crépuscule des dieux of Richard WAGNER - November 10, 1985. 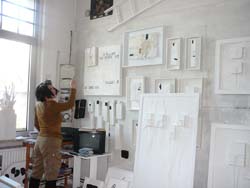 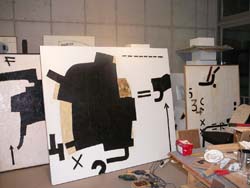 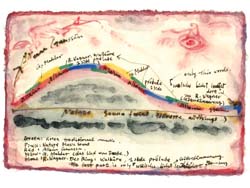