This work was composed in the spirit of a Chamber Concerto, with an overall form in seven continuous parts which follow one another without interruption : The neutron star - Crystallization - Phantom mass - Striation of time - The blue star - Black hole - Fresco (Stained glass mosaic).

Thinking in terms of the mosaics of plastic artists, I attempted to employ the most important aspect of this type of visual art : juxtaposition and fragmented overlapping. In my piece this notion occasionally results in extreme situations, such as, in the second part, assemblages of extremely rapid “ribbon figures”, played ff, juxtaposed several times with long, suspended silences, producing a result at once unexpected and perturbing, which affects the perception of time. Other procedures derived from the mosaic are also present, particularly in the final part.

Another aspect of my work in this piece concerns the morphology of instrumental sonority. In essence, the instrumentation is composed entirely of ‘held sound’ instruments (winds, strings), leaving aside any attack/resonance instruments such as percussion or keyboards. Yet, it is precisely this simple figure, attack/resonance, which will serve as the ‘germ element’ on which the first and fifth parts are based, thereby creating sonic illusions in terms of the recognizability of certain instruments, and resulting in the progressive (mental) generation of hybrid combinations of instruments.

Ultimately, though, beyond these considerations, Mosaïque Céleste may be considered as a sort of journey on the fringes of the univers, with its blue stars, its black holes, its striated galaxies…which can be contemplated, or quite simply observed, dreamily.

" A magnificent musical moment, a sublime work, the public was greatly touched, I congratulate and thank you. It’s superb to share in this manner such intense moments of emotion through a work of such beauty and poetry. "

" Allain Gaussin’s sense of wonder at the whole universe often prompts his music, and Mosaïque Céleste was both exploration and contemplation, its highly poised rhythmic figurations contrasting sharply with the long-held notes. "

Allain Gaussin’s Mosaïque Céleste was definitely the most satisfying work of all, displaying transparent scoring (Gaussin has a wonderful ear for timbre and balance) and an ability to develop, rather. 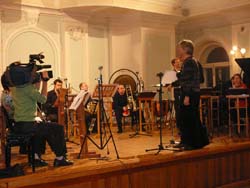 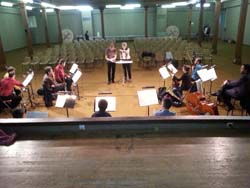 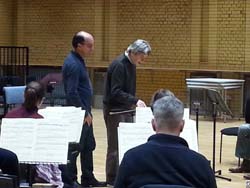 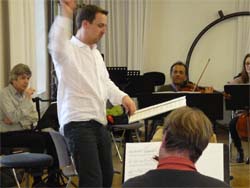