Every morning, tirelessly, the Buddhist monks Zen, with their wooden rakes in their gravel garden, draw enigmatic geometric lines, different each time. The few very big stones (sometimes rocks) selected and placed from the beginning here or there, in an equally enigmatic and symbolic way, are for their part immutable. Facing these gardens and during long hours, the monks meditate on emptiness, between what is fixed and what is changing, to search life’s essence itself and attempt to reach the Satori (the supreme enlightenment).

The work is divided in five parts: Selflessness - The Unanswered Question - Tense meditation - Tearing away from one’s body - The spirit of light.

Three types of materials structure the composition :
• electro-acoustic sounds coming from numerous sonic objects recorded then more or less transformed in the studio.
• synthesis sounds made of poor wave forms (sinus, triangle, square...) but profusely treated and developed in a highly sophisticated computerized environment.
• A soloist clarinet, which musical role will be different in each part.

The true face of Jardin Zen comes from the confrontation of these three materials with the five parts of the general form. This is why the score is built in a symmetrical way around the third part (with the soloist clarinet), the electro acoustic sounds have been placed in the second and fourth parts, and the sounds from the sonic synthesis in the first and fifth parts. This way, in each part of Jardin Zen, I drew my own geometrical lines while trying to grasp this tiny piece of eternity Time...

The friendship I had with Gerard GRISEY, as well as the respect we mutually had for each other’s works enticed me to dedicate him Jardin Zen before he unexpectedly suddenly passed away. While I was writing Jardin Zen, I thought then that the best dedication would be to offer him a light spectral scent. It can be easily perceived in the first part.

For the electronic sounds of the CD, plan the following equipment :

• If the concert hall is rather small
- 1 CD player
- 1 stereo amplifier
- 2 speakers on each side of the stage.
- The clarinet may be amplified, particularly in the second part (breath) and the fourth part. Then use a microphone and a small mixing desk.

• If the concert hall is rather large
- 1 CD player
- 2 stereo amplifiers
- 4 speakers on each side of the audience. Respect the output (left /right) of the electronic sounds.
- 1 microphone for the clarinet
- a small mixing desk.

• If the concert hall is very wide, the number of speakers can be more important. On July 7, 2012, at Festival Inventionen 2002 in Berlin, Jardin zen was played in a very large church (Parochialkirche) with an acousmatic equipment of 48 speakers.


The musician-assistant
He controls the CD sound output level as well as the clarinet, ensuring the perfect balance of the whole (audio /clarinet) compared to the partition. Whatever is the concert hall, the musician-assistant must be placed in the middle of the audience.


The clarinetist
He has a digital chronometer placed next to his score, so as to be always synchronized with the electronic sounds of the CD.


Departures/ stops of the CD
It can be activated either by the musician-assistant, or by the clarinetist with a Midi pedal.
But if there is an environment with computer, all the settings (chronometer, departure / stops of the CD, the nuances, the equalizers, etc.) can be preprogrammed.


For any further information, send an email. 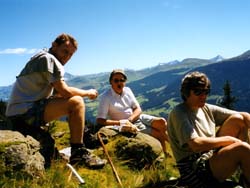 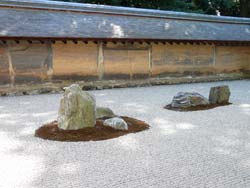