Allain Gaussin was born in Saint-Sever (Normandy) in 1943. He knew that he would be a composer from an early age, but received no musical training because his parents were always opposed to his vocation. Consequently, he decided to leave home when he was 20 year old and to interrupt an undergraduate degree in mathematics, physics and chemistry at Orsay University in order to start music studies.

He started at the Paris Conservatoire (Conservatoire National Supérieur de Musique de Paris) in October 1966, where he was successively awarded second prize in harmony (Roger Boutry), first prize in counterpoint (Jean Claude Henry), first prize in fugue (Yvonne Desportes), first prize in analysis (Jean Pierre Guézec, then Claude Ballif), and finally the composition prize in Olivier Messiaen's class, which he attended from 1972 to 1976.

He also studied piano (Hélène Boschi) at the Ecole Normale de Paris, choral and orchestral direction in Nice (Louis Fourestier) and at the Paris CNSM (Robert Blot), and finally electroacoustic music at the GRM from 1973 to 1975 (Pierre Schaeffer and Guy Reibel).

In 1984, he took a musical training programme at Ircam. He continued this initiation from 1997 to 1999 with a residency at the Lyon CNSM's Studio Sonus. Finally, from 2004 to 2005, he deepened his knowledge of computer tools at Ircam, where he was part of a working group on rhythm.

In 1977, Allain Gaussin was selected to enter the Academy of France in Rome (Villa Medicis) during two years. There, he composed works such as Colosseo (1978) and Éclipse (1979) and met several times Giacinto Scelsi. In 1984, he was selected by the DAAD (International Academy of Arts) to an one-year residency in Berlin. There, he discovered other musical sensibilities and other esthetics, such as those of the Korean visual artist Ouhi Cha. It was during this period that he composed his string quartet Chakra which was performed at Paris in 1985 by the Arditti Quartet.

"In this young man, who looks so timid, you can feel a violence and strength in his approach to music, a kind of grappling with the material. And so the structure, the structure has to really explode. It is rather fabulous…" (Brigitte Massin, musicologist).

In 1994, he was selected to a four-month residency at the Villa Kujoyama in Kyoto, in order to find out about the use of the shakuhachi flute of the japanese zen buddhist music that he had recorded on the radio, and which had made a deep impression on him during the period when he was finding his own path as a young composer. Japanese culture consequently became a rich source of inspiration for him, as seen in several of his works, such as Ogive (1977), Satori (1998), Jardin Zen (1999), and a little later, Tokyo-City (2008). He forged many bonds of friendship and mutual respect with numerous Japanese artists in this country.

"THE LIFE FORCE OF HIS MUSIC"

From Irisation-Rituel for flute, soprano, and orchestra (1980), by way of Arcane for piano (1988), or Années-Lumière for full orchestra (1992-93) and L'Harmonie des Sphères for ensemble (2006), "if you look at Gaussin's career through his works, you will be strongly drawn to the life force of his music, through the captivating energy of the movement of the sounds," writes Ivanka Stoïanova about Allain Gaussin.

"The impact of this music seems to be inevitable: it acts directly on the body and an expectant sensitivity; it imposes a "necessary passage" exploring "the intimate space of the body", linked by its many facets to "the infinite space of the universe"..." (Ivanka Stoianova).

Allain Gaussin was awarded the SACEM Prize in 1983 and 1989, and the Fondation de France prize for Arcane in 1986, and he received the sponsorship of the Fondation Beaumarchais in 1991 and of the Association Orcofi in 1992. In 1998, he was awarded the Turin ICONS (International Centre for New Musical Sources) international composition prize for Mosaïque Céleste. His work has twice received the Grand Prix of the Académie Charles Cros: for Irisation-Rituel, Camaïeux, and Arcane (Salabert, Harmonia Mundi) in 1995, and for L'Harmonie des Sphères, Satori, Tokyo-City, Jardin Zen, Ogive, and Chakra (Ameson) in 2014.

His works have been published by Music Sales (Leduc and Heugel) and Universal (Salabert and Ricordi).

In the 1970s, Allain Gaussin founded the Conservatoire Olivier Messiaen in Ris-Orangis, in the department of Essonne. He directed this establishment for more than 10 years using innovative methods. For instance, the teachers all had to make their students play pieces by living composers.

From the 1980s, he began a teaching career in Paris. He taught composition at the Schola Cantorum from 1981 to 1992, then composition and orchestration at the local music colleges in the arrondissements from 1991 to 2000 and at Sevran from 2000 to 2008.
At the same time, he held composition workshops from 1998 to 2001 at the Conservatoire National Supérieur de Musique in Paris and Lyon. In 2003-2004, he replaced Marco Stroppa as professor of composition at the Paris CNSM.

He first taught outside France in Darmstadt, where he gave composition seminars and classes in 1986 and 1988. He was subsequently invited to give seminars and master classes, in particular in Asia (Osaka, Kyoto, Tokyo and Seoul), America (Columbia University in New York, and Montreal), and in Moscow (Tchaikovsky Conservatory).

From 2004 to 2011, he began making regular trips to Japan, his « second country », in order to teach orchestration to doctoral students at the Osaka College of Music. He was granted the tittle of « Visiting professor » when he retired in 2011.
From 2010 to 2012, under the auspices of the French Music Academy in Kyoto, he organised a composition workshop every year. He set up the "Olivier Messiaen Prize" to close each session.

He currently teaches composition at the American Conservatory in Fontainebleau, where he has been running summer courses since 2003.

In 1976, at his own expense, Allain Gaussin published an anthology of poems of youth, Transes et Lumière, with a preface written by Olivier Messiaen. Later, Éditions d'Écarts published some poems he had written while simultaneously composing a musical work with eponymous titles. This was L'attente…, L'absolu (2004), re-edited with a German translation in 2009, then in an expanded edition in 2013.

In 1981, Henri Dutilleux said of Allain Gaussin : "From my first contact with his music, I felt that I was in the presence of a truly artistic nature. In him, an intuitive poetic sense and a taste for researching and trying out the most highly developed techniques of our age go together very well…" " 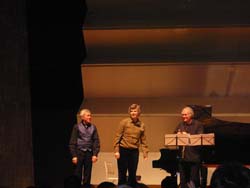 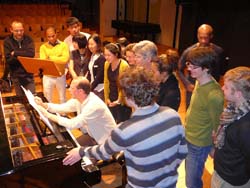