What is time? How can it be described? This mystery, which many philosophers have attempted to approach, concerns us as well. Present in my work since my earliest youthful poems, my reflections on time have become the central subject of a poem that I wrote recently, before I decided to integrate it in my music.

Beyond Time is a sort of challenge to try and grasp the ungraspable, the fleeting, the inaccessible. The work consists of five sections that follow each other without a gap, revealing five allegories of Time: Virtual Instant, Miroir of Time, the Abyss of Time, Paradoxal Spirals, Beyond Time.

In my score, the poem is never sung (except, on occasion, the word Instant). Neither did I seek to render it comprehensible — quite the contrary. Instead, I sought to distort certain words or expressions temporally, either through dilations, having them very slowly whispered, or through compressions, to have the colours of the consonants and vowels arise suddenly in a flash. By way of contrast, these can also be sung through various types of vocalises that are more or less long.

Numerous silences are inserted here and there, in order to create a dynamic suspension of Time in which the resonance and the cristallisation of the poem, which the listener will have read beforehand, are spun around.

The harp, far from having a simple accompanimental role, underscores the fragility of this temporal quest with its extremely diverse, and sometimes virtuosic instrumental playing techniques. It reveals itself as light, airy, fleeting and even, sometimes, predominating. At the beginning, an ostinato of chords, like the light pendulum of an atronomical clock, introduces the materials little by little. From there, other paths emerge, revealing the arcana of Time and of the Instant. The path is metaphorical, and subliminal. 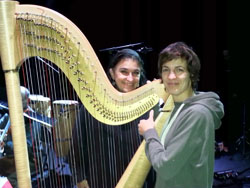